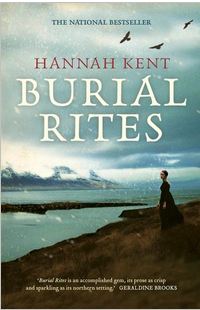 Game time! Emma Chapman and Annabel Smith have come up with a blogging meme based on the idea that everyone in the world can be linked by six steps, only with books. You can read the rules on either Emma or Annabel’s blogs which I have linked above. So let’s get started.

The first book is Burial Rites, a debut novel by Australian author Hannah Kent. The voice of Agnes is so distinctive, I love a strong female historical narrative and this book delivers that in spades. The sound of Agnes (in my head as I read) reminded me of:

the voice in Elemental by Amanda Curtin. Again, the voice is very distinctive, it’s full of thick lush language and Scottishness. The way the accent is written so well, full of colloquialism made me think a little of:

Paddy Clarke Hahaha by Roddy Doyle. Maybe because the book is written in the voice of a child I  thought it was mean for children. It is not. I was far too young to read a book like this (there are some swears and ‘grown up’ themes). Another book that I read when I was young and impressionable was:

The Witches by Roald Dahl. This book almost singlehandedly gave me all of the nightmares of my childhood. In fact, it still makes me nervous to think about it (and the film… holy moly!) another book I read as a child that scared the bejesus out of me thus sticking in my memory forever to haunt me was:

The Wasp Factory by Iain Banks. Mesmerizing and horrifying all in one psychotic bundle of a boy named Frank who retold the story of his childhood and partook in bizarre daily rituals, which allow him to make sense (or escape?) the world around him. Pretty heavy stuff. The last book on my list touches on mental health issues and the type of compulsive obsessive behavour that The Wasp Factory focuses so heavily on, but it’s a much gentler read.

The final book in my six degrees of separation is Perfect by Rachel Joyce. Perfect is the story of Byron, a school boy in 1972 and  Jim, who spends his time trying (and mostly failing) to escape his OCD. It’s a beautiful, dark story that explores social class, gender roles and mental illness and one that will stay with me for a very long time.  What would be your six degrees of separation from Burial Rites? Join in! Post a link to your blog in the comments.