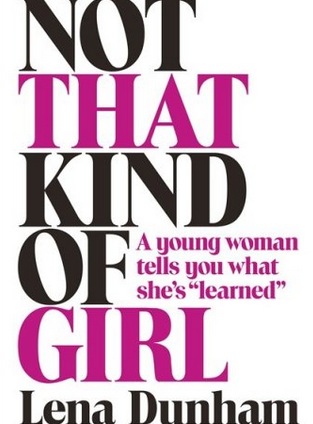 I was so excited to read this book, so excited in fact that I lugged it all the way over to Sydney, just so I could read it on the plane journey home, 5 hours to dedicate to my friend Lena, all snuggled together in a blanket of feminism and wit. To say that I was disappointed by this book would be an understatement, I don’t know if I built it up too much in my mind or if I was expecting the book to be exactly like Girls but after a chapter of self involved monologue I was so bored that I toyed with the idea of reading the inflight magazine for a while to give myself a break.

There are a couple of parts of this book that caused controversy and made the internet almost explode. The first one, that was described by some very strange far-right-Christian lobbyist people as molestation, was that she looked at her sister’s vagina. The second was that she outted her sister. I assume, since Dunham and her sister are very close, that none of these incidences impacted negatively on their relationship. I also assume that Grace Dunham would have read a copy of this book before it was published so clearly she doesn’t have any issues with what Lena has written about. Interestingly, both incidences seem to be more about Lena’s desire for attention rather than anything else.

There are moments in the book where Dunham makes some very candid and humourous insites into life as a 20-something woman in the internet age, but mostly it’s very self absorbed.

For a book to start with the sentence “There is nothing gutsier to me than a person announcing that their story is one that deserves to be told, especially if that person is a woman.” I just wish there was a bit more depth to it, a bit more substance rather than endless talk of the blokes she’s slept with and her food journal. I mean really, keeping a food journal is dull enough, but reading about someone elses? It’s hardly a story that needs to be told.

Sorry Lena, I still love your public persona and you have bangin’ tatts, but as far as the lessons you think you can pass on to others, you left me cold.